Part of my ongoing effort to catalog my Hall of Fame-related coverage at SI.com for this site. As this series is in progress, some articles have not yet been published. 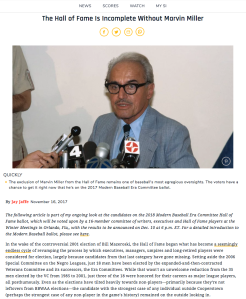 Even for a process designed to reconsider long-retired players not elected via the writers’ ballot (managers, executives and umpires are included as well)— this feels like a particularly reheated slate. Six of the candidates have been considered via at least one Era Committee ballot before, namely Steve Garvey, Tommy John, Dave Parker, Ted Simmons, Luis Tiant and Marvin Miller, the lone non-player. While Don Mattingly, Jack Morris, Dale Murphy and Alan Trammell are all first-timers here, each spent the maximum 15 years on the BBWAA ballot, with Morris the only one coming anywhere close to the 75% needed for election by the end of his run:

Garvey, Mattingly and Tiant received their highest shares of the vote in their ballot debuts, with Parker and Murphy doing so in their second years. When the Hall announced the truncation of the 15-year eligibility window to 10 in the summer of 2014, Mattingly — who along with Trammell and Lee Smith was grandfathered in, as he was past the 10-year point — was down into single-digit percentages. In short, the candidacies of those players were arguments for a mercy rule. 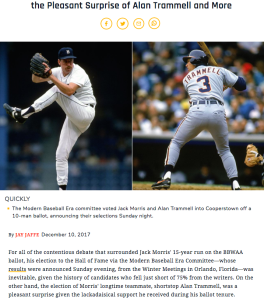 For all of the contentious debate that surrounded Jack Morris’ 15-year run on the BBWAA ballot, his election to the Hall of Fame via the Modern Baseball Era Committee—whose results were announced Sunday evening, from the Winter Meetings in Orlando, Florida—was inevitable, given the history of candidates who fell just short of 75% from the writers. On the other hand, the election of Morris’ longtime teammate, shortstop Alan Trammell, was a pleasant surprise given the lackadaisical support he received during his ballot tenure.

A Ballot Weighty in Talent and Controversy
JAWS intro
My Virtual 2013 Ballot
An Alternative View
Results: a shutout 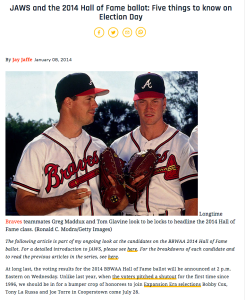 Burning Questions
JAWS intro
Why There’s a Backlog (and How to Fix It)
My Virtual 2014 Ballot
Best Classes Ever
Most Overlooked at Every Position
All One-and-Done Team
All What-Took-Them-So-Long Team
Election Day Guide
Results: Glavine, Maddux, Thomas elected
Next 5 Years
An Early Look at 2015 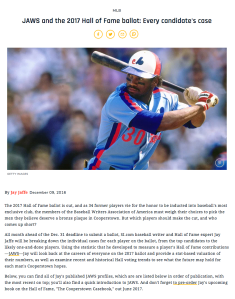 The 10 finalists up for discussion on the Pre-Integration Era ballot aren’t household names, but there are worthy candidates. Owners Sam Breadon (Cardinals) and Jacob Ruppert (Yankees), executive and equipment pioneer Al Reach and umpire Hank O’Day all have compelling cases. None of those spark the imagination or lend themselves to quantification the way the six former players — Bill Dahlen, Wes Ferrell, Marty Marion, Tony Mullane, Bucky Walters and Deacon White — do, however. Some of those six played during a time when the game’s rules were still evolving, making their raw statistics harder to parse, but advanced metrics can help provide context.

This was the rare year that I did not get to profile every candidate before the election. However, I did cover the trio of managers briefly for SI’s Hall of Fame Commemorative Issue, which was designed to capitalize primarily on the election of the Braves’ Greg Maddux, Tom Glavine and Cox. Since it never made it online, here’s the section on the managers:

Torre was a career 109 games below .500 when he was hired to manage the Yankees in November 1995; the New York Daily News hailed him as “Clueless Joe” when he took the job with a team that had only just returned to the postseason for the first time in 14 years. Overseeing a homegrown nucleus that had begun developing during George Steinbrenner’s suspension — Bernie Williams, Andy Pettitte, Mariano Rivera, Derek Jeter and Jorge Posada — and unafraid to stand up to a boss who had changed managers 17 times since their last title, he guided the Yankees to the playoffs in each of his 12 seasons in the Bronx via 10 AL East flags and two Wild Card appearances. In his first year, he led the team to their first championship since 1978 with a World Series victory over Cox’s Braves. The Yankees went on to win four straight pennants from 1998-2001, winning the first three of those World Series and coming three outs away from the fourth; they added another pennant in 2003. They won 100 games four times, topped by a record 114 wins in 19998. After Torre fell out of favor in the Broxn following the 2007 season, he took over the Dodgers, guiding them to to NL West flags and Championship Series appearances before finally retiring in 2010 with a 2326-1997 record and a .538 winning percentage. His win total ranks fifth all-time, while his 15 postseason appearances are second (thanks to the advent of the current format), his four titles tied for fourth, and his six pennants tied for sixth.

A fiery dugout leader who eventually set the major league record with 159 managerial ejections, Cox spent 25 years as the manager of the Braves plus another four (1982-1985) piloting the Blue Jays, who won 99 games and the AL East flag in his final season there. He led the Braves to 14 NL East flags and one Wild Card appearance, giving him a record 16 postseason appearances in all. The Braves notched at least 100 wins on his watch six times, and took pennants in 1991, 1992, 1995, 1996 and 1999, but despite their stellar core of starting pitching, they won just one Fall Classic. They did bring home plenty of hardware, with Maddux, Glavine and Smoltz combining for five Cy Youngs under Cox, Terry Pendleton and Chipper Jones both winning MVPs, and David Justice and Rafael Furcal claiming Rookie of the Year honors. Cox retired with a 2504-2001 record — the fourth-highest win total of all time — and a .556 winning percentage.

La Russa was just 34 years old when he took over as the manager of the White Sox in mid-1979, one year after he earned a law degree from Florida Sate University. During his 33 years at the helm of the White Sox (1979-1986), A’s (1986-1995) and Cardinals (1996-2011), he changed the game via his innovative bullpen management. Once his starter tired, he used a parade of left- and right-handed specialists, strikeout artists and groundball machines, to create favorable matchups. While he didn’t invent the closer role, he refined it via his attempt to turn the game over to relief ace Dennis Eckersley with a clean slate at the start of the ninth inning. He won an AL West title with the White Sox in 1983, and led the A’s to three straight pennants from 1988-1990 — winning it all in 1989 — plus an AL West flag in 1992. In St. Louis, he led the Cardinals to seven NL Central titles, two Wild Card appearances, three pennants and two World Series wins. The last of those came in 2011 over the Rangers; La Russa promptly retired, thus becoming the first manager ever to go out on top. In all he compiled a record of 2728-2365 and a .536 winning percentage. Only Connie Mack managed (and lost) more games, only Mack and John McGraw won more, and only Cox and Torre took more teams to the postseason.

The Golden Era is one of three periods defined by the Hall when it split the Veterans Committee into three subcommittees in 2010. It covers those candidates whose careers had their greatest impact between 1947 and 1972; the other periods are the Pre-Integration Era (up to 1946) and the Expansion Era (1973 onward). Candidates from each era are considered on a triennial cycle; the last Golden Era vote, conducted in December 2011, saw Ron Santo finally elected, albeit a year after he had passed away.